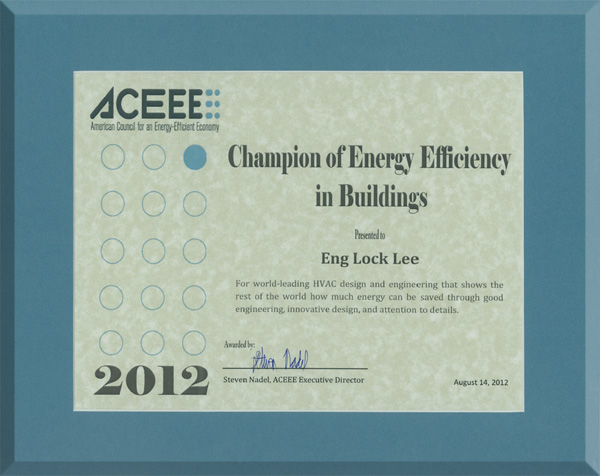 The GreenAsia Group is proud to announce that Associate Eng Lock Lee has received one of four Champion of Energy Efficiency Awards from the American Council for an Energy-Efficient Economy (ACEEE). ACEEE recognized Lee for his “world-leading HVAC design and engineering that shows the rest of the world how much energy can be saved through good engineering, innovative design, and attention to details”.

This year’s awards were presented on August 15, 2012. Winners were nominated by their peers and selected by a committee of ACEEE’s Board of Directors from an impressive group of over 120 nominations. Selection criteria were based on each nominee’s impact, innovation, and leadership in the energy efficiency field.

In his nomination of Eng Lock, Amory Lovins, Cofounder, Chairman and Chief Scientist of Rocky Mountain Institute wrote, “In my view, HVAC design divides into two eras, B.L. and A.L.—Before Lee and After Lee—so revolutionary has been his impact on how the best mechanical designers think and work. Mechanical design will never be the same. The slow fuse is lit, and the change is irreversible, thanks to the irresistible power of his ideas.”

The three other winners were: